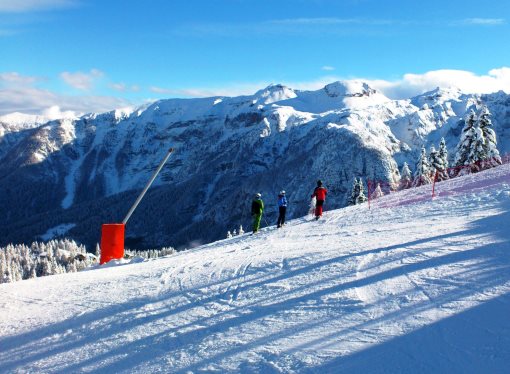 Folgarida is a renowed tourist resort in the village of Dimaro and in the province of Trento. Its name derives from the latin "filicaretum" that means "place of ferns". It is situated at an altitude of about 1300 m asl in Val di Sole in the heart of Brenta Dolomites. The ski resort was founded in December 1965, when three lifts were opened: the cable "Folgàrida", consisting of a three places chairlift with an hourly capacity of 498 persons, the "Ottava Monti" which remained operative only for a few weeks and "Spolverino" which came into force in February 1966. With the gradual increment in receptivity and collaboration with Marilleva, an other ski resort nearby, Folgarida has grown yearly and thanks to the ski connection to Madonna di Campiglio, it has become a solid reality in the Italian ski resort. Spending an holiday in Folgarida means to enjoy the beauty of the natural environment of Val di Sole, both during the winter and summer season. It is possible to take part into various manifestations and events such as sport, musical, cultural and food-and-wine events.