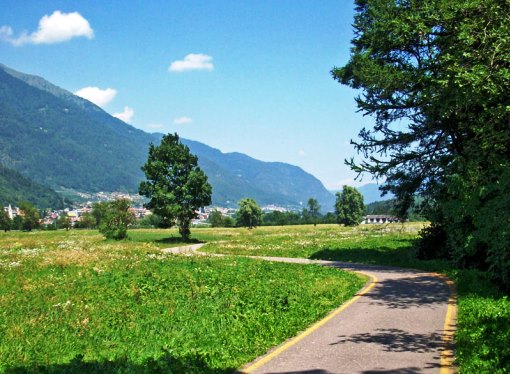 Malè is a town of 2,123 inhabitants of the province of Trento, the main centre and the capital of Val di Sole. In this town are located many facilities, such as: an health centre, an indoor pool, completely renovated in 2008 with three pools and a fitness area, an artificial ice rink, a tennis club, a football field with synthetic grass, a playground and a basketball park for the children. The local broomball team is playing in the "Golden" league, that is the first division for national broomball. The hockey team, with a tradition of more than twenty years, presents several youth teams and a senior team. From 15 to 22 June 2008, the Trial World Championships UCI Mountain Bike & Trials "Val di Sole 2008" was held in Malè. Malè is located in a strategically position within the valley: in regard to history and tradition it represents the centre of the valley and it is sorrounded by the Brenta Dolomites, which are UNESCO World Heritage Site, Madonna di Campiglio and the Stelvio National Park. The economy is based mainly on tourism and service sector, but also other fields have a relevent impact on the valley economy: trade, agriculture and local handicrafts. Places to be visited are surely represented by: the “Santa Maria Assunta” church (1183) and the “Civiltà Solandra” museum, which offers the opportunity to learn past activities of this valley civilization related to agriculture, cheese-making, handicrafts and trades. In Malè there is also a small instrumental group, directed by the music master Tiziano Rossi. It was founded in 1998 and debuted for the first time in June 2000. During these years, this instrumental group has had the opportunity to perform in different occasions, both locally and in special events (for example: Ischia, Capri, Rome, Milan, and some cities in Austria). Instrumental Group of Malè is therefore an expression of Val di Sole youth and they intend to grow in future from the intellectual and cultural side.